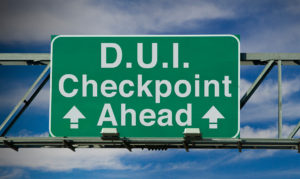 The goal of DUI checkpoints is primarily deterrence: to raise the perceived risk of arrest, and secondarily to enforce drunk and impaired driving laws. Checkpoint information such as location and time is often highly publicized in the targeted areas using High Visibility Enforcement (HVE) tactics to promote compliance with the law. But, not all agencies and organizations agree with distributing details about sobriety checkpoints as it may enable potentially impaired drivers to avoid the targeted area. For these reasons, there is some debate over the best approach to checkpoints: Advertise or Surprise?

One argument for disclosing location is to protect the agency conducting the checkpoint. Checkpoints were deemed legal and constitutional by the Supreme Court in 1990; however, publicly announcing them in advance limits their intrusion into people’s lives thus avoiding the possibility of a Fourth Amendment unlawful search issue arising.

Several national
agencies strongly recommend the use and publicizing of sobriety checkpoints.

Historically, law enforcement agencies have preferred the “surprise” strategy for DUI checkpoints. Like many officers, Virginia State Police spokeswoman Sgt. Michelle Anaya feels that notifying the public about checkpoints may allow illegal drivers to detour around them. “By providing notice to the public, those that are breaking the law are given the opportunity to potentially avoid a checkpoint.” Missouri Representative Scott Fitzpatrick felt so strongly that checkpoints are too easy for drunk drivers to avoid that he sponsored and passed a bill effectively eliminating their use in that state.

Even if a sobriety checkpoint is a non-publicized surprise, drivers may still be able to prepare in advance. The Fair DUI Flyer works on the premise that most states have not outlined exactly what standard of cooperation or adherence is required at checkpoints. This simple state-law specific flyer is placed by the driver in their window from the inside as they enter the checkpoint. The flyer shows the applicable law by which the driver is not required to show ID, speak with law enforcement, or even open their window.

The crucial element of surprise for sobriety checkpoints was threatened by technology almost a decade ago, and again recently. In 2011 a group of U.S. Senators wrote a letter to smartphone companies asking them to ban apps that would identify drunk driving checkpoints. Several companies complied with the request. With the rise of Waze, a GPS navigation app that alerts users to traffic issues and police presence, a letter has again been written. New York City police in early February 2019 sent a letter to Google, the app’s parent company, stating that people who post the locations of sobriety checkpoints may be “engaging in criminal conduct”. Echoing the sentiment of the pro-publicizing checkpoint camp, Waze stated that identifying police locations promoted road safety because drivers were made aware and modified their behaviors.

Should sobriety checkpoints be publicized or kept undisclosed? Share your thoughts below.